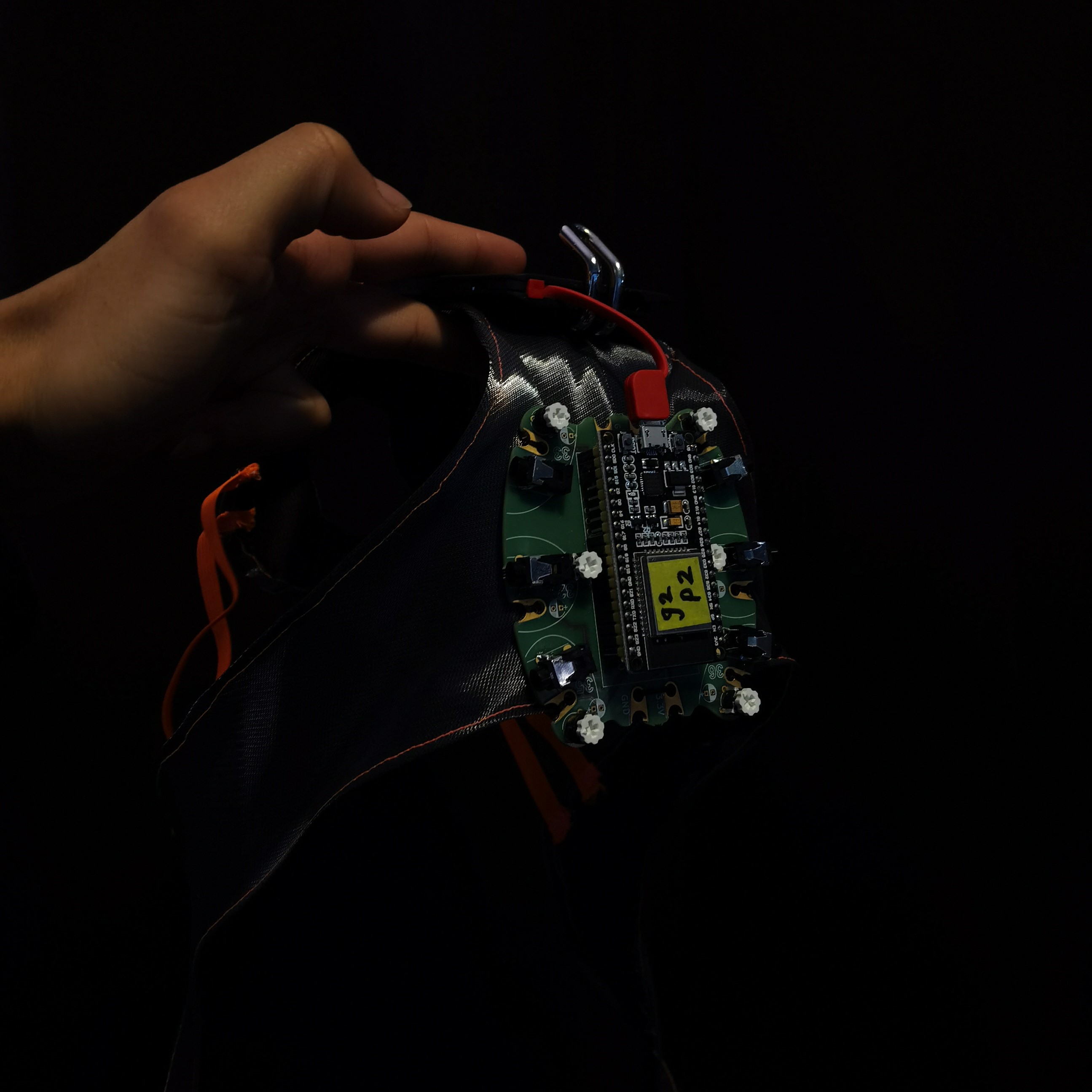 After few days at the workshop with Objekt&&Spiel master course of HfS Ernst Busch introducing us to the world of selfmade and programmed textile strech sensors focusing on playing first we explored the relation between sound and body movement through dressing up as characters creating a form of communication between them.

By exploring how different clothes change and decide on a set of movement possible, or most natural, we quickly set on portraying two opposites. One being restricted to very detailed gestures done just with hands and one having to move and stretch their whole body with big and heavy motions. We thought of a kind of language through sounds that still enables them to communicate with eachother, despite their differences in character, creating a sort of enchanting dance reacting to their counterpart.

From this we created two big stretch sensors attached to one creatures extremities and two gloves with one stretch and four touch sensors. We wanted to give the heavy moving creature just one more general and loud sound that changes while moving, while the detailed moving creature could choose between several but small and pitched sounds. After creating a mockup video we put our first sound for the big stretch sensors attached between rubber bands into the preprogrammed granular synthesis in PureDate. There the first sensor chooses a random starting point of the wav and the second decides on the playing speed, creating a more organic less calculated sound. The sensors made by using the piezoresistive property of some fabrics simply by stretching it (the shorter the fabric strip, the better as more drastic change is occuring) decides the amount of electricity flowing and sends them through an aux cable to the breakout board attached on a belt on the waist to guarantee the biggest range of movement. From there it gets send via wifi to a broker installed on a raspberry pi computer which we connect with from our own pc playing the PureData programm.

For the glove sensors we stitched connections along the sleeves to make the hand appear more delicate and connected them again with aux cables to a breakout board this time situated on the forehead on top of a headband making use of the fencing mask that was part of the costume for the second creature. The measurements of these sensors were played with the sample trigger in PD. There to make the strech sensor work as a touch button we made some changes and created another sub programm called sample trigger by which only with a certain amount of electricity from the glove (created with different resistors for each finger) a certain tune would play.

On our last day of the workshop we put our setup into action playing out the communication with and between the creatures. 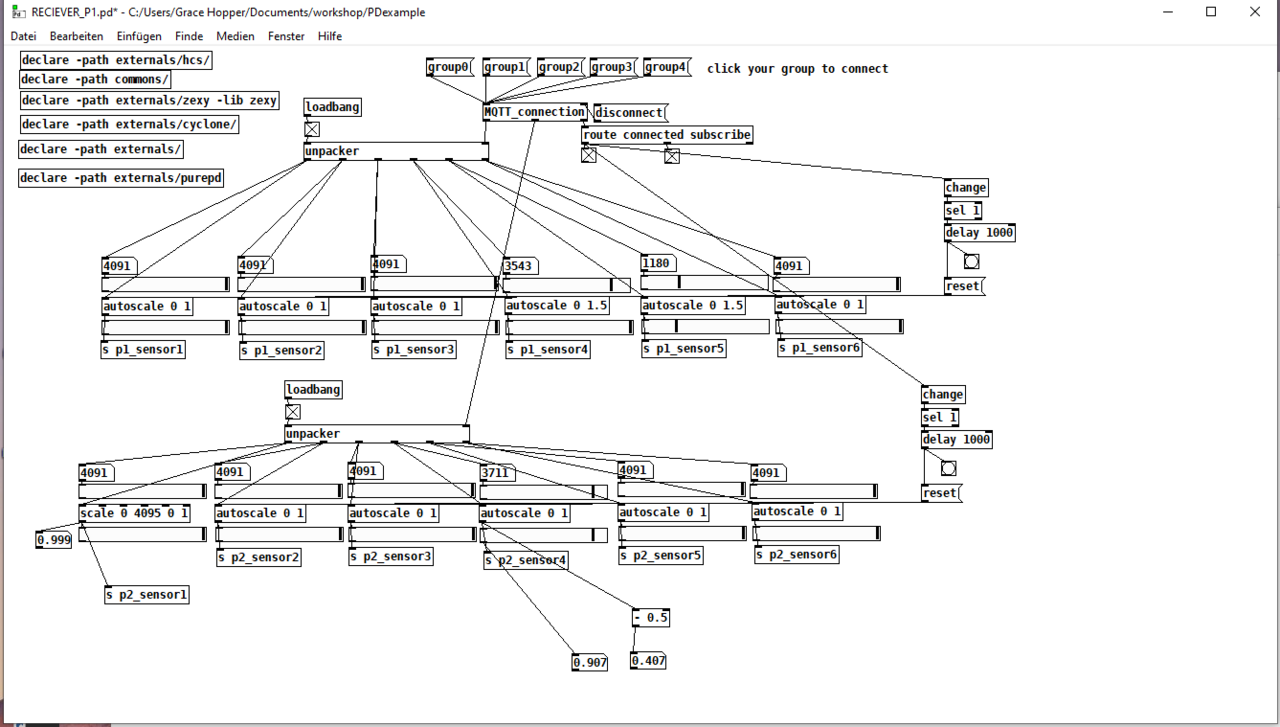 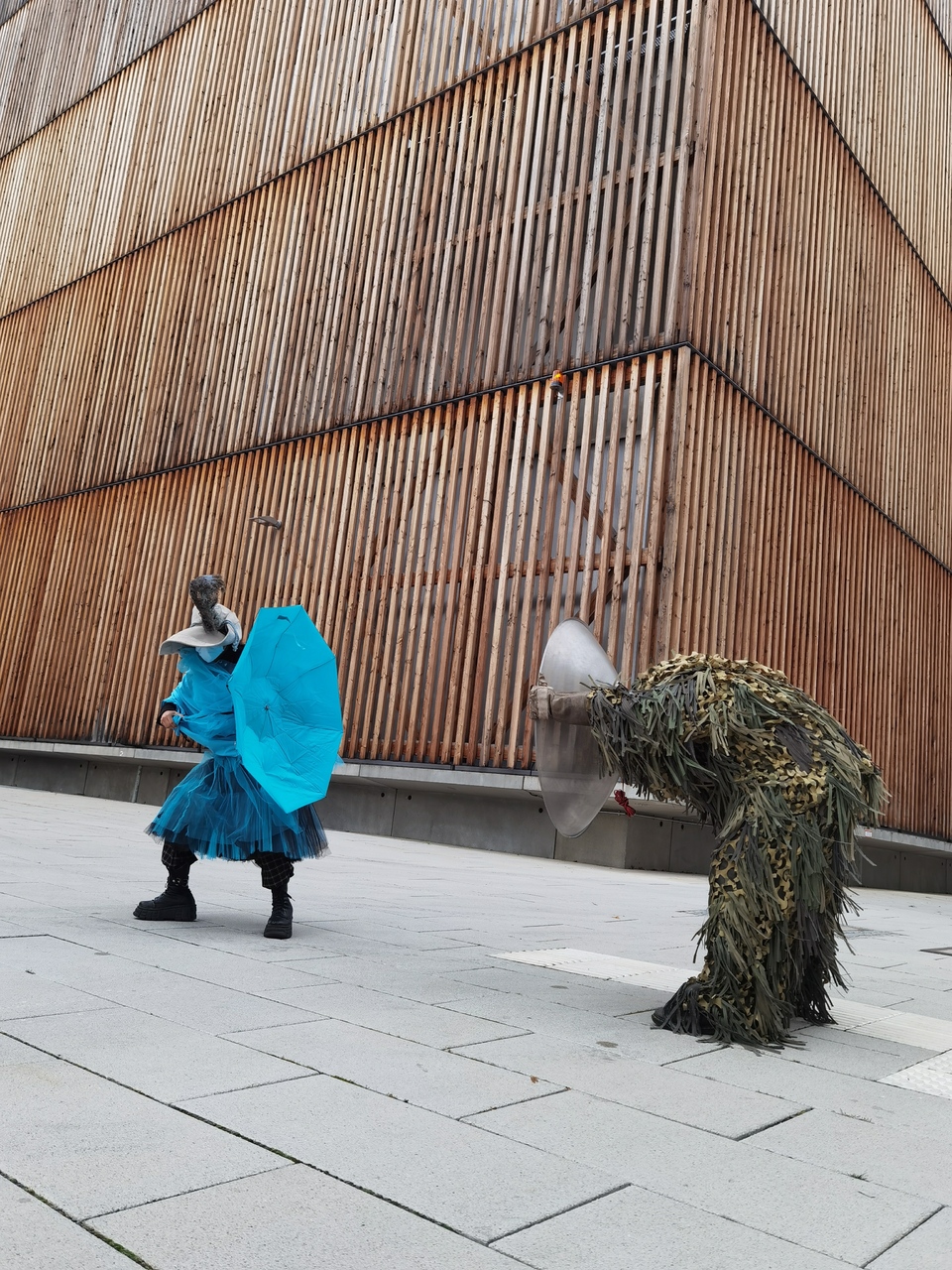